The Difference between Arabica and Robusta Coffee

Posted By CoffeeBeanKings on 8 June 2015 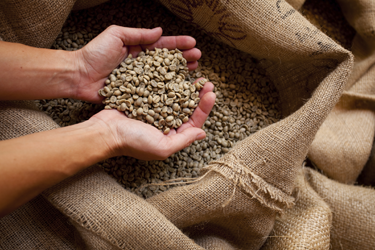 Most of us have seen roasted coffee beans but unless you have visited a coffee plantation it’s unlikely you’ll be able to identify a coffee tree.  They can grow to more than 9 metres high but are pruned low so that they can easily be picked and cultivated. Whilst we call them coffee beans they are in fact a fruit that grows in cherries taking almost a year for them to mature.

Arabica and Robusta coffee grows all year round

There is no season as such for these trees since they grow continuously. Hence in a plantation you might see some trees in blossom, some bearing ripe fruit and some with green cherries all at the same time. Coffee trees are recognisable by their dark green leaves that have a wax covered appearance and they can bear fruit for up to 30 years depending on the climate.  They will thrive in an environment where the temperature doesn’t fluctuate greatly, and ideally should be planted in rich soil, where there is plenty of rain and out of direct sunlight.

There are two main species of tree, Arabica and Robusta coffee, from which many varieties of coffee are produced:

Around 70 per cent of global coffee is made from Arabica beans and it is also the most expensive.  Originating in Ethiopia this coffee is aromatic and mild.  The best coffee is produced from trees that are grown at high altitudes, between 610 and 1,828 metres above sea level. However the quality can vary depending how close the plantation is to the equator. It’s vital that the trees are grown in temperatures that are no higher than 75 degrees where there is around 60 inches of rainfall annually.

The cost of cultivating Arabica coffee trees is high because of the altitude they are grown at. Most are hand-picked because machinery cannot navigate the steep inclines.  In comparison to robusta trees, Arabica trees are more likely to become diseased and despite being strong, they will die if there is a heavy frost. For these reasons they require nurturing with a lot of monitoring and care. Self-pollinating, the trees produce beans that are more flat and longer than robusts beans  and they contain less caffeine.

Robusta coffee trees thrive in Indonesia, areas of South East Asia, Brazil, Vietnam and Central/Western Africa. Cultivation of Robusta represents around 30 per cent of the global market but plantations are increasing.  Robusta beans are not as big as Arabica and have a more round shape.  Robusta coffee trees are not as prone to disease, have more resistance to parasites and are generally much stronger.

Unlike Arabica, Robusta trees can survive well in hotter temperatures, up to 85 degrees, and therefore can be grown lower down although the rainfall requirement is the same at 60 inches annually. Robusta will also die in heavy frost but overall the production cost is infinitely cheaper than Arabica. Containing up to 60 per cent caffeine, Robusta coffee has a strong distinctive flavour and is mainly used in instant or blended coffee.

Check out our single origin Arabica and Robusta coffee beans and enquire about special offers.